Homily on Marriage pt 3- Self Denial in Marriage - Constantine Zalalas

'Forpost' (Outpost) - What the Church Can Accomplish

(This film is not in English... but one can still get much from simply watching I think... If anyone knows where to find a version with English subtitles, please share it with me!) Russian documentary about Holy Ascension monastery in Ukraine which has also assumed the role of children's orphanage/hospice. The main character in the film is Father Michael - father of 29 adopted children along with three of his own biological children. He was awarded the title "Hero of Ukraine". Where are our hospitals, our soup kitchens, our schools? Indeed, where are they? Below is a video of what a monastery in the Ukraine is accomplishing. If they can do great things, why not us? Starets Mihail started the monastery in 1994 with four brothers. Now, the monastery has 90 monks and they are raising 220 orphan children. Fr. Mihail was an orphan himself ... The monastery is in Ucraina, 7 km from the northern Romanian border. They are serving in Ukrainian and Romanian languages because "we are (all) Orthodox."
Posted by Agapi en Xristo Links to this post

The means that unite us to God ( St. John of Kronstadt ) 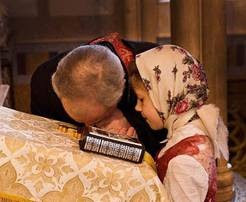 The surer and stronger are the means that unite us to God (prayer and repentance), the more destructive are the actions brought to bear against them by God’s opponent and ours, who makes use of every means to attain this end: our body, so inclined to laziness; the weakness of our soul, its attachment to earthly goods and cares; doubt, so near to everyone; incredulity, unbelief; impure, evil, and blasphemous thoughts; the oppression of the heart, the darkening of the mind—all these are brought to bear against the inattentive, through the action of the enemy, in order to put a stumbling-block in the way of their prayer, on the ladder that leads us up to God.
This is the reason why so few pray sincerely and heartily; this is the reason why Christians so very seldom prepare themselves for Holy Communion—so seldom confess and receive the Sacrament.


- St. John of Kronstadt
Posted by Agapi en Xristo Links to this post

Sin Originates in the Mind 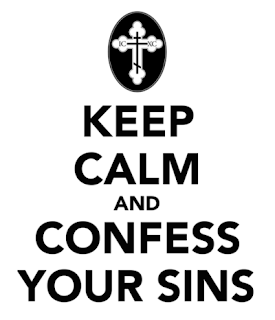 Just as it is impossible for fire and water to pass through the same
conduit, it is impossible for sin to enter into our heart if it does not first
knock on the door of our heart by striking with a sinful image.
The great Law-giver Moses, rather the Holy Spirit, says to us,
“Watch yourself, lest a hidden word in your heart becomes a sin” (Dt. 15:9).
“A hidden word” refers to the recollection of something evil that God
despises. The holy Fathers call this an “assault,” which is launched by the
devil in the heart.
Observe, and you will see how the enemies of our salvation defeat
us with fantasies, lies, and empty promises. Satan himself fell in the same
way from the height of heaven like lightning because he fantasized about
becoming equal to God. Likewise, Satan separated Adam from God by
stirring his imagination and making him believe that he would become
equal to God. This is how our false and cunning enemy usually tricks all
people who fall into sin.
The demons always lead us to sin via an empty and fake fantasy.
With a fantasy related to the acquisition of money and greed they led
wretched Judas to betray the Lord and God of all. And with the false hope
of a short-lived repose, honor, and glory, they made him hang himself and
led him to eternal death, rewarding him with the exact opposite of what
they had presented to him with their fake fantasy; that is, with their assault
of evil thoughts.
First of all, there is an assault with an evil thought. Second, a
dialogue takes place when our thoughts mingle with the demonic
suggestions. Third, there is consent, when we contemplate the demonic
suggestions, and we decide to carry out evil. Fourth comes the physical
action; that is, sin. If, therefore, we guard our mind carefully and push away
the initial assault as soon as it appears (by resisting it and calling upon our
Lord Jesus Christ), the next stages (dialogue, consent, and sin) remain
inactive. The evil demon, because he is a bodiless spirit, cannot deceive
souls unless he uses fantasies and thoughts.

by St. Hysechios
Posted by Agapi en Xristo Links to this post