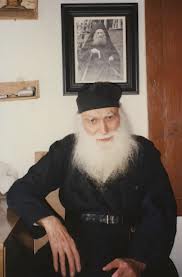 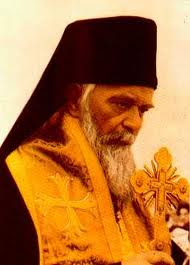 "Thus says the Lord: 'Cursed is the man who trusts in human beings, who seeks his strength in flesh, whose heart turns away from the Lord'" (Jeremiah 17:5).

When man alienates himself from God in his heart he usually trusts in men and in himself, for in who else can he otherwise trust when he untied his rowboat from God's boat? Since he has already untied his rowboat from God's boat, nothing else remains for him except to trust in his rowboat or in the rowboat of his neighbors. It is a weak trust, but there is no other for him! It is a weeping trust above the abyss of destruction, but there is no other!

But, O heaven and earth, why did man untie his rowboat from God's boat? What happened to man that he flees from his security? What kind of calculation did he calculate when he discovered it would be better for him alone on the tempestuous waves than in the household of God and near the hem of God! With whom did he make an alliance when he breached the alliance with God? Is it with someone stronger than God? Foolishness, foolishness, foolishness!

"Cursed is the man who trusts in human beings." This God spoke once and men have repeated this thousands of times. Being disappointed in their trust in men, men have cursed thousands of times those who have trusted in man. God has said only that which men experienced only too well and confirmed by their experience, i.e., how indeed cursed is the man who trusts in man!

Brethren, that is why we should have trust in God Who is the stable boat on the tempest and Who does not betray. Let us have trust only in Him for all other trust is a devilish illusion.

In You do we trust, O Lord, our fortress and refuge. Tie us along side You and do not allow us to untie ourselves, if we, by our foolishness and cursedness, attempt to untie ourselves from You. To You be glory and thanks always. Amen.
St. Nikolai Velimirovich
Posted by Agapi en Xristo 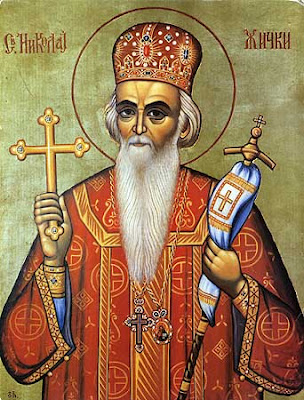 When a man acquires a Christian conscience, he zealously labors to correct his life and to please God. For him, all else becomes of little importance. We have examples of such men not only among the great ascetics and spiritual fathers but also among powerful rulers themselves. Emperor Theodosius the Great gives us such an example who, for a brief time, fell into heresy after which he repented. St. Ambrose, his earlier critic, spoke over his lifeless body: "I loved this man who, divesting himself of all imperial insignias, openly in church bewailing his sin and, with sighs and tears, begged forgiveness. What ordinary men are ashamed to do, the emperor was not ashamed to do. After his glorious victory over the enemies of the empire, he decided not to approach Holy Communion until the return of his sons only because his enemies were slain in battle."

Email ThisBlogThis!Share to TwitterShare to FacebookShare to Pinterest
Labels: Παναγια 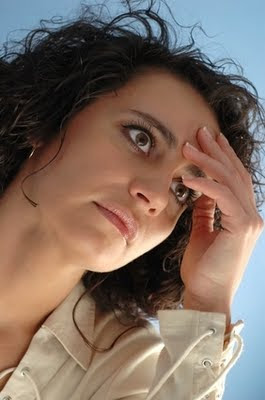 While there is no research on the use of the Jesus Prayer and relief from headaches there is some research from those who meditate.

Meditation has been shown to help offset the symptoms of chronic pain, including headaches. One study showed that 72 percent of patients with chronic pain who underwent meditation training, reported significant reductions in their level of pain. In another study, patients who practiced meditation experienced fewer migraine headaches, enhanced their pain tolerance, and reported a greater sense of well-being.The Jesus Prayer is quite different than meditation as it is an prayer in communication with God. But there are many similarities to the regular practice of this prayer that are similar to meditation. The Jesus prayer should be much more effective than meditation as it does call on God for His mercy.


The regular practice of the Jesus prayer requires at least 15 minutes per day where you can set aside all daily cares and quietly in your mind repeat the prayer, "Lord Jesus Christ, Son of God, Have mercy on me." One will find that this is not an easy task as our minds are very active and we will observe many distracting thoughts while we try to pray in this way. Gradually as we keep up a daily practice we will gain in our ability to concentrate on the words of the prayer. As we gain in this way, our mind becomes quiet, our body relaxes, and our heart opens to God. This opening then allow His grace to flow through us bringing any healing power as God wills for us.


With the practice, when we feel a headache coming on, we can stop for a few minutes and repeat this prayer until the pain subsides. We don't have to wait for the actual headache to intervene with a prayer. Here are some symptoms that are known to be precursors to and headache: Fatigue, mood changes, food cravings, loss of appetite, yawning, increased urination, and muscle stiffness. We can observe our own situation and learn to recognize these warning signs. There are also some common triggers that can be avoided. They are: Caffeine, chocolate, aged cheese, red wine, hormonal changes, stress, and too much or to little sleep.


The power in this prayer comes from the name, "Jesus". Its practice requires humility realizing that we cannot control everything in this world, including our aches and pains. Its practice is both a worship of God and a discipline with similarities to many meditation techniques. It is not an easy practice and takes patience and endurance. Research has shown that it actually causes a change in neurological networks of our brain. One must first have faith in Jesus Christ as our Lord and Savior.
Posted by Agapi en Xristo

Praying with the Heart - St. John of Kronstadt 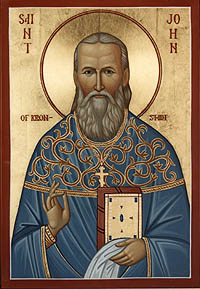 Some good advice on Prayer from Saint John of Kronstadt

When praying, we must absolutely subject ourselves to our will, and turn it towards God. It must be neither cold, crafty, untruthful, nor double-minded, otherwise what will be the use of our prayers, of our preparation for the Sacrament?


It is good for us to hear God’s voice of anger: “This people draws nigh unto me with their mouth, and honours me with their lips, but their heart is far from me” (Matthew 15:8).


So do not let us stand in church in a state of spiritual prostration, but let the spirit of each one of us on such occasions burn in its working towards God.


Even men do not much value the services which we render to them coldly, out of habit. And God requires our hearts: “My son, give Me your heart” (Proverbs 23:26).


Thus he who does not pray or does not serve God with his heart, does not pray at all, because in that case his body only prays, and the body without the mind is nothing more than earth.


Remember, that when standing in prayer, you stand before God Himself, who has the wisdom of all. Therefore, your prayer ought to be, so to say, all spirit, all understanding.