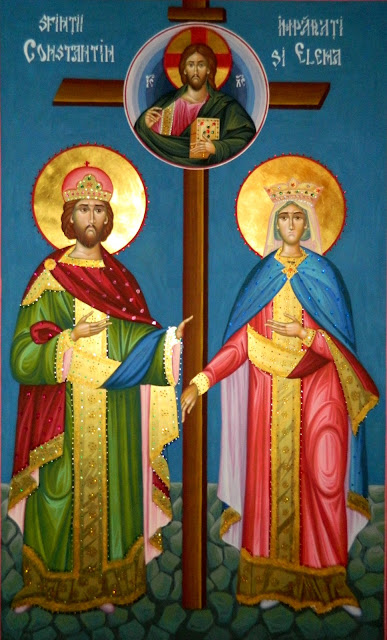 Constantine's parents were the Emperor Constantius Chlorus and the Empress Helena. Chlorus had further children by another wife, but by Helena he had only the one, Constantine. Constantine fought two great battles when he came to the throne: one against Maxentius, a tyrant in Rome, and the other against Licinius not far from Byzantium. At the battle against Maxentius, when Constantine was in great anxiety and uncertainty about his chances of success, a shining cross, surrounded by stars, appeared to him in the sky in full daylight. On the cross were written the words: 'In this sign, conquer!' The wondering Emperor ordered that a great cross be put together, like the one that had appeared, and be carried before the army. By the power of the Cross, he gained a glorious victory over enemies greatly superior in number. Maxentius drowned himself in the Tiber. Immediately after this, Constantine issued the famous Edict of Milan, in 313, to put an end to the persecution of Christians. Conquering Byzantium, he built a beautiful capital city on the Bosphorus, which from that time was named Constantinople.

At this time, Constantine fell ill with leprosy. The pagan priests and doctors advised him to bathe in the blood of slaughtered children, which he refused to do. Then the Apostles Peter and Paul appeared to him and told him to seek out a bishop, Sylvester, who would heal him of the disease. The bishop instructed him in the Christian faith and baptized him, and the leprosy vanished from the Emperor's body.

When there was discord in the Church about the troublesome heretic Arius, the Emperor summoned the first Ecumenical Council in Nicaea, in 325, where the heresy was condemned and Orthodoxy confirmed.

St. Helena, the Emperor's devout mother, was very zealous for the Christian faith. She visited Jerusalem and found the Precious Cross of the Lord, and built the Church of the Resurrection over Golgotha and many other churches in the Holy Land. This holy woman went to the Lord in 327, at the age of eighty. The Emperor Constantine outlived his mother by ten years and entered into rest at the age of about sixty in 337, in the city of Nicomedia. His body was buried in the Church of the Holy Apostles in Constantinople.

O Lord, thy disciple Emperor Constantine, who saw in the sky the Sign of Thy Cross,/ Accepted the call that came straight from Thee, as it happened to Paul, and not from any man./ He built his capital and entrusted it to Thy care./ Preserve our country in everlasting peace, through the intercession of the Mother of God,/ for Thou art the Lover of mankind.

Today Constantine and Helena his mother expose to our veneration the Cross,/ the awesome Cross of Christ,/ a sign of salvation to the Jews/ and a standard of victory:/ a great symbol of conquest and triumph.
Posted by Agapi en Xristo